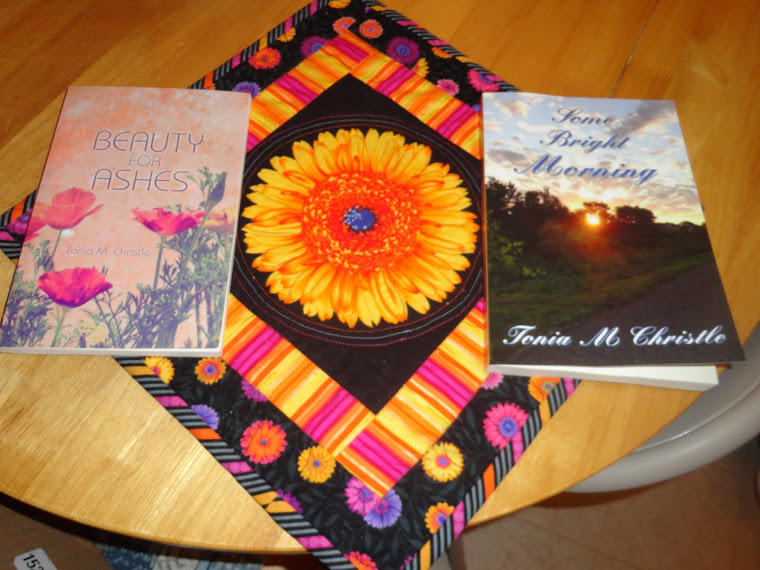 Behind the Poem: THE RICHNESS OF POVERTY

The poem, THE RICHNESS OF POVERTY, (Beauty for Ashes, pg 115) was written November 27, 2005.  I wrote it after thinking about Black Friday and excess in general.
Posted by Tonia Says at 2:33 PM No comments:

Behind the Poem: THE RETURN

The poem, THE RETURN, (Beauty for Ashes, pg 114) was written on February 17, 2007.  This was around the time Bible study was starting, I was feeling very out of sync with everyone.
Posted by Tonia Says at 1:22 PM No comments:

Behind the Poem: THE PRAYER

The poem, THE PRAYER, (Beauty for Ashes, pg 113) was written on May 1, 2002.  This poem is really special to me because it is the first and only one that my mom asked me to write.  One of her coworkers had just lost a child, and my mom asked if I could write a poem for her.  When I think about it, I think about the pain of losing a child, but also of my mom's confidence in me.
Posted by Tonia Says at 7:28 AM No comments:

Behind the Poem: THE ILLUSION OF PERFECTION

The poem, THE ILLUSION OF PERFECTION, (Beauty for Ashes, pg 112) was written on June 16, 2003.  This is my favorite poem in the entire book.  It's the first that was ever inspired by Mattie JT Stepanek's poetry.  (Look him up, you won't be sorry.)  I wrote it at a Bible study and meeting with missionaries who had worked in India.  I was distracted the entire time, because I had just bought an album called Music Through Heartsongs, which was a collaborative project - a CD of music based on Mattie's poems - performed by Billy Gilman with occassional voiceovers by Mattie.  I was particularly taken by a song called I Am/Shades of Life.  The lyrics just worked their way inside me and I had to write something inspired by this amazing 12-year-old, as Mattie was at the time.
Posted by Tonia Says at 7:38 PM No comments:

Behind the Poem: THE ADVANTAGES OF STAYING BUSY

The poem, THE ADVANTAGES OF STAYING BUSY, (Beauty for Ashes, pg 111) was written on November 28, 2005.  This was two days before the end of National Novel Writing Month.  I was wishing it would have extended longer due to my wintertime anxiety.  I enjoyed having something else to focus on for a month, and was nervous about it coming to an end, because it meant I would have to face the emotions I had been hiding.
Posted by Tonia Says at 4:30 PM No comments:

Behind the Poem: TAKE A STEP BACK

The poem, TAKE A STEP BACK, (Beauty for Ashes, pg 110) was written on November 20, 2005.  I believe I wrote this at church on a Sunday morning, while listening to the worship team practice.  At that particular time in my life, there was nothing more soothing or pleasent for me than to listening to that.  Except, perhaps, singing myself.
Posted by Tonia Says at 4:21 PM No comments:

Behind the Poem: SWEET INDULGENCE

The poem, SWEET INDULGENCE, (Beauty for Ashes, pg 109) was written on December 3, 2005, on a weekend, hanging out with just my sister.  All these simple things just spoke to me with their inherent loveliness, and I was struck by the fact that there was no harm in indulging in these simple things.
Posted by Tonia Says at 4:16 PM No comments:

To contact me/submit a review for Beauty for Ashes or Some Bright Morning:

Send me an E-mail here: toniachristle@hotmail.com


Praise for Beauty for Ashes:

"Tonia gave me the book she wrote when I met her on tour. I read it, and shared it with my family and friends and we all LOVE IT! If you like poetry or reading, then you would love this! It's awesome!" - Jaimie

"This book is a quick read of inspirational and thought-provoking poetry. More than a hundred poems with themes of faith, struggle, and even current events of the past eight years or so. My favorites include What Story Do I Tell and Deep." - Tara

"Tonia has an amazing gift. It is clearly evident in the hundred or so poems in Beauty for Ashes. She asks many deep and soul-searching questions that all of us must ask ourselves in the midst of our trials, pain and brokenness. Tonia allows us to ponder issues such as the brevity of life and time, as well as the pain of broken relationships. She bravely and eloquently addresses social issues as well, such as the Holocaust, school shootings, simplicity and poverty. As Tonia dives into the depths of her own soul, she is able to open a door of hope to others in simply being open and honest about her own heart. She is able to speak words of healing and encouragement to those in pain and suffering by simply identifying with the pain. Many of her poems have spoken words of comfort to me when I have felt discouraged and broken. In reading this collection of heartfelt poetry, one will truly come to a place where they can exchange their Beauty For Ashes." - Joey

"Beauty for Ashes is an amazing book of poetry. It shows the struggles, revelations, and development of Tonia's faith over the years. Each and every poem is relateable to any reader's life. Tonia has a true gift, and I feel so lucky to have been able to see into her life through this book. Some of my personal favorites are "When My Brother Cries" and "The Prayer". Both are wonderful works that show Tonia's deep faith and her ability to overcome tough times. It is truly an amazing work of art!" - Mandy